Yesterday morning I took a walk on the boulevard (Carrillo Ave) in Santa Barbara. It is at the end of their main shopping street where a wharf begins that has more shops and restaurants. Your father and his brother Uncle Ted, who is now a soldier, used to love to go fishing from that pier every summer. 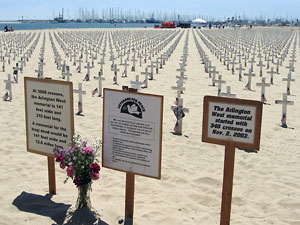 Much to my surprise today, on the beach next to the wharf was a flat space with 3000+ tiny little crosses with names on them. Some had pictures and flowers next to them. They represented the 4,146 U.S. soldiers, both men and women that have died so far serving our country in the Iraq war since 2004. 30,324 more soldiers have been wounded, and an estimated 650,000 Iraqi’s have died. *This memorial called Arlington West was built by a group of retired soldiers called “Veterans for Peace.” It was designed like big cemetery in Virginia for people killed in World War I and World War II that has the famous statue of five soldiers holding up a flag on Iwo Jima in Japan.

It was very very VERY sad for me to walk past all the reminders of the not so little sacrifices (look up that word), that each of these soldiers made for our country in a war. Your uncle Ted went to Iraq and was one of the lucky ones who came back after his six month tour of duty. He is an officer in special operations and does high level secret stuff. Very few men make it through the training to be this type of warrior. 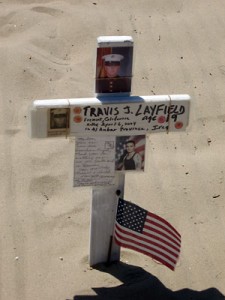 Ted, who chose to go to a military academy for college, says he is one of the ‘alpha males’ of the military. That word is used for things that are the strongest and brightest. I like seeing the yellow ribbons on cars that say ‘Support Our Troops.’ They need to know we care about their lives.

However, I personally do not like this war, nor do the Veterans for Peace. I think it is not doing much to stop terrorism (talk about that word on September 11th with your folks). I think it is costing the government lots of money that would be better spent on schools for young people like you, and roads, and health care for all Americans. It costs $2billion a week (!) a total of $7trillion. Try putting those numbers with all their zeroes on paper, and ask your parents to look up how much is spent on schools in comparison.

What have you been taught about ‘war’ at home or in school? I will look forward to hearing from you about this when the time comes. And I know your Uncle Ted would love to meet you. He is home now and won’t be deployed (another word for sent to a war zone) until March 2009.

Let’s pray and send blessings to everyone involved in making decisions about this and other wars.