Robert died Sunday morning. His daughter Gail and one of his best friends from his Navy day 40 years ago were staying in the next room. Just Saturday night they were talking with him about a big sign he’d made years ago when he’d been selling memorabilia products from World War II. So they put it up over his bed. 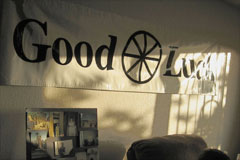 It was made on oilcloth and was about 7 feet across and 3 feet down. In big black letters it said “GOOD  *  LUCK” and had a circle between the good and the luck with spokes like a wheel in it. Robert had told us it represented the wheel of “dharma.”  I just looked up dharma. It means “phenomenon” or an extraordinary event! In Buddhism it means the way a person lives and works in this world, on a path toward dharma yukam or nirvana. These words literally all mean to let go from suffering. They all involve the cycle of death and rebirth or reincarnation.

Wow! Don’t you think it amazing they put that sign up the night before he died? The last conversation they had with him was about the sign! Gail said she got up really early and heard Roberts’ breathing and it sounded noisy and rattley. He sat bolt upright in bed, and she asked him if he needed anything. He said “no,” but shouted to her, “Gail, go to your room.” She told me he sounded like when she was a little girl. Then he lay back down with his head way back and began breathing a little more normally.

They went out for coffee and when they came back they noticed Robert wasn’t breathing at all. His spirit had left his body. He’d died. Gail said it was exactly 8:08 a.m. on November 8th. Robert was very in to numerology. We’ll have to look up that combination of numbers another time.

Gail did a lot of crying of course, but she managed to find a Buddhist Temple in Carmel, and by 1:30 in the afternoon I arrived just in time to witness a ceremony. Two Buddhist monks with shaven heads wearing robes were reading final prayers and chanting for him in a language I couldn’t understand. His other daughter, her husband, and Robert’s 9-year-old grandson were there.

Sometimes the words sounded like “ohm ma nay pa pa cay-ya” …. I won’t try to describe them. But it was really beautiful and peaceful. People were sad but not in pain, sad in a happy kind of way. His daughter Gwyn sat on the bed holding his hand, and even nine-year old Konner came up and held the other hand for a little while. I had never touched a dead body before. The skin was yellowish. It just felt very thin and a little waxy. I went up and held his hand and mentally thanked him for all he’d taught me. I told him I was sorry I never got to play Bali High for him, but perhaps we’ll play it at whatever other kind of funeral the family decides to do.

There are a lot of other things about funerals and taking care of what to with a person’s things when they die, but we’ll talk about them another time. I just wanted you to know about the special, I’d call them spiritual non-accidents that happened around and before Robert ‘made his transition.’ In my religion, that means left this earth for some other universe.

What have you been told about what happens when people die? I hope you haven’t been taught to be afraid of talking about it. Have you gone to any funerals? Konner actually went to one for one of his friends who was killed in a car accident. That was terribly sudden and really sad for everyone, especially his parents. At least Robert had lived a full life and people were somewhat ready for this to happen.

My prayer for you is that you live a full life, and maybe, just maybe I will get to see you and actually know you before I leave this planet. I love you both, whether I can show it or not.