Yesterday Robert was buried at a military cemetery in Santa Nella California halfway between where you and I live. The day started off beautifully as we drove the hour and a half drive from Monterey over Pacheco Pass with bright sunlight on the rolling mountains, and wisps of fog lifting off the reservoir on Route 152. That road reminded me of you. I used to take it when I came every month to see you. I actually cried a little about that, more than for Robert’s burial. It was time for him to go, and I wasn’t that close to him. Yet I still yearn to be closer to you. 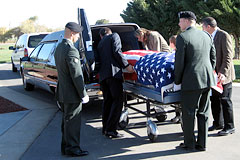 We arrived at the cemetery just in time to line up our cars and drive behind a big black Cadillac hearse (big station wagon used in funerals)to the burial site. Robert’s son and son-in-law helped two other soldiers lift the flag draped coffin out of the van onto a rolling cart.

Five retired veterans stood at attention holding rifles behind a flag draped casket that held Robert’s remains. Although I am not a minister, the family asked me to open the military service with a prayer. I even put on a black graduation robe to read from Marianne Williamson’s book of prayers called Illuminata.

Afterwards, everyone said I spoke very well, as if I had been leading prayer for years. I guess I have, but not in any official manner. After my reading, a chaplain in uniform took over the ceremony. He talked about the dedication to our country that all soldiers pledge, and thanked Robert and all of the men and women who serve our country in the military. Then they shot off three loud rifles in salute to Robert. I cried then thinking of your Uncle Brian who just came back from Afghanistan. I wept for all the soldiers that hadn’t come back from there and Iraq, and gave their lives for these two most recent wars. Wars I don’t understand.

Then they played TAPS over the speaker system. I remember first hearing taps at Girl Scout camp when I was nine. Each night all the campers would circle the flagpole, and they’d take down and fold the flag while a bugle played the melody and sometimes we’d sing the words:

Day is done,
Gone the sun,
From the hills,
From the Lakes,
From the Sky.
All is well,
Safely rest,
God is nigh.

It was a beautiful way to mark Robert’s passing.

Well, that’s a lot on a big subject.

Have you ever been to any funerals yet? If and when you do,  I hope you will not be scared and know just what to say to the people who have lost someone. They just need to know you understand.