Hairs on My Chinny Chin Chin? 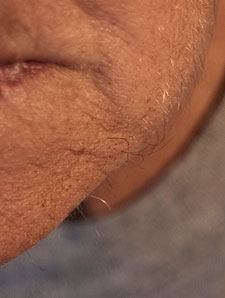 Yikes! You really feel old when you look in the mirror and notice those nasty little hairs that pop up unexpectedly on your chinny chin chin’ are white! Egads. I guess I really am 65!

All my adult life, perhaps since my mid-twenties, although I was naturally blonde like you, I sometimes had to tweeze or ‘take care of’ hairs that according to most shouldn’t ‘be there’ on a woman’s face. As a lifelong health and sex educator, with a fascination with sex that one of my husbands (not Larry) called an obsession, I told myself it was because I had excess testosterone, the male sex hormone that all women have some of in their bodies. Actually I’ve had that checked and its not the case. Facial hair is pretty common in most women.

Anne, I just hope you don’t get too obsessed with beauty and how you look all the time, and spend lots of energy and time that you could be doing something else fun or creative, on worrying about how people will think of you. Most people won’t get that close, and the one’s that do, should love you the way you are. I would.