I’ve told you about how I’ve always wanted to be a writer, right? Actually my mother, your great grandmother who is still alive at 89 and living in a retirement home in New Jersey, did too. 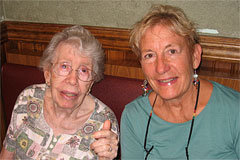 When my sisters and I were in grade school, she was an English and Latin teacher. At that time she sent articles to magazines like American Girl or Ladies Home Journal. I remember one about me learning to swim at Girl Scout camp that actually got published. She wrote and edited a history of the town we grew up in ‘This is Clifton’ for the League of Women Voters.

Whenever I had term papers for homework, she would help with the sentence structure and grammar. I can still see her tiny half-script half-print handwriting in red ink correcting my errors and making critical comments.
When I was in college, and even more recently when I was writing articles for magazines, I would send her my stuff, and ‘of course’ she would always have something, usually negative, to say about it. Red ink all the way. I’m sure she just wanted me to improve, but Grandma Wilkin had a hard life and often a lot of what comes out of her mouth is critical and sounds sour. She is very smart and judges people by the amount of formal schooling they’ve had or the degrees after their name. In fact she judges everything. Lucky for me I got a Ph.D!

Over the years I’ve worked out some of my feelings about this in therapy. It isn’t easy feeling that nothing you can do, or write, or say is ‘good enough.’ The process of getting feedback on your work or art from people ‘above’ you at school or on a job is always difficult.

Well I am writing this today, because I just had a realization about criticism and about how people’s minds grow. About 15 years ago when Grandma Wilkin retired to a ‘Leisure Village’ community in New Jersey, she took a class on writing memoirs. A memoir is supposed to capture the story of your life. Last year when I visited I found some of what she had written. It was still on her computer. She had written aboug her father, who would be your great great grandfather: William J. Bridges born in 1875, her mother Mary Alice Whalen born in 1873, and her ‘retarded’ sister Betty born in 1923 two years after her. There were other chapters about the house they built that I lived in when I was a baby, vacations, games they played, and the special college/high school she went to. It went all the way up to one on ‘Choosing a Husband, who would be your great grandfather, my father: Jack. He died of a heart attack when I was 19.

For Grandma Wilkin’s Christmas gift this year, I put all the chapters in order, and edited them (never showing her my own ‘red ink). Larry made a cover, inserted pictures and we made them into a book entitled ‘Mary B. Wilkin’s Memoir-ies.’ We made copies for all her children and grandchildren. I am saving one for you.

She was thrilled of course and thanked us profusely. I got a fascinating insight when she called and said “I re-read them all and was surprised at how well written they were.” By that she meant the punctuation and grammar was perfect.

As I was putting the book together, my almost 65 year old self , was surprised at the fact that there was very little ‘affect,’ feelings were missing from the sometimes painful scenes she described. Her comments about the writing really surprised me. Yes, her stuff had good sentence structure and punctuation, but I had to put it in order to make it appear like a story, and the descriptions were very ‘this is this, and that is that, and then this happened.’ Good writing to me has more depth and metaphors in it. It makes you cry or scream with joy as you read descriptions of the characters’ feelings. Here’s what she wrote in a story on ‘Games in the 1920’s’ as she described falling off her roller skates with

“The injury however, was not just a scraped knee. My elbow wouldn’t move. Since our doctor lived just around the corner, my mother walked me over to Dr. Mc Dede and he said it was a dislocated elbow. Without even taking me into the house, he gave one strong quick pull on the arm and reset the elbow right on his front lawn.”

Yikes no description of what that felt like at all? When she was thirteen, my mother’s mother died of breast cancer! All she wrote about it was:

“That summer I had no idea how sick my mother was. I was just impatient for her to get better so that we could go on our annual vacation to Boston or at least take day trip to places where there was swimming. My afternoons were spent across the street on the screened-in porch of June Byrnes. We spent hours playing card games with June’s mother. She taught us pinochle, flinch, hearts and several other games.

On the morning of August 31, 1933 I woke to find my father sitting on the top step of the stairs waiting for me to wake up. He had to tell me the unbelievable news that my mother had died. I don’t remember my immediate reaction. I was too stunned. It was too unreal that she wouldn’t be around anymore. I wouldn’t be able to talk to her again—EVER! How could this house exist without Mother?”

She did go on to talk about crying at the funeral, especially when they lowered the casket into the grave; but reading this gave me insight into what made my mother ‘shut down’ and remain so critical of people and things for the rest of her life. I became more empathic and forgiving of her judgments of me … somewhat.

So the realization I had was two-fold. First, I learned to take a different perspective or view about criticism. By not taking too personally what someone who is putting you down says, we can rise above feeling bad about not doing stuff ‘the right way.’ There are many ways to do things. Just good punctuation is not good writing. When we look at where the person doing the ‘red ink’ on our work is coming from, we can take their disapproval in a different light. We might be able to shake or release it. Or perhaps we could take what works for us and leave the rest. Some people do have more expertise than we do, and we can learn from them.

Second, I realized that I somehow after 65 years I have grown beyond my mother. That is huge! They say ‘the child becomes the father of the man.’ Maybe this means that as the firstborn daughter, I have at long last grown to become in some weird way smarter or wiser (and maybe a better writer) than her mother is at this stage in her life. But oops, there I go making judgments just like she does!

Well that is enough ‘heady’ stuff for now. I do hope you ask your mother and other grandmother and great grandmother if you have one, about their memoir-ies. You will learn a lot about what life was like almost a hundred years ago, in the very family that contributed the genes or the DNA to your growing 7 year old mind and body.

P.S. Here is a link to your great grandmother’s “Memoir-ies”