You were married three times Grandma?

I can hear you asking me “You were married three times Grandma, why?”

“Great question,” I’d reply, “How much time do you have and what would you like to know?”

Well, since this is to the seven year old you, and shorter is better, I’ll give you the ‘in a nutshell’ version first. Writing it will help me remember exactly what I learned from each marriage. I’ll try to tell you why I fell in love with and married each time, as well as why I left. And to be fair, I’ll tell you the gifts each of these men were to my life.

Hmmm, since in my career I was a sex educator, and the language I used from an early age is rather ‘salty,’* I’ll do three versions: one to you at 7 with a G-rating, and save the others for when you’d be more ready to hear them, perhaps the PG rated version at 17, and another the R-rated version, at 27.

The two later versions may have sexual images and bad words; but they will build to the truth as I see it now. Lucky for me, I’ve never experienced any physical violence, so we don’t have to worry about that, will we? 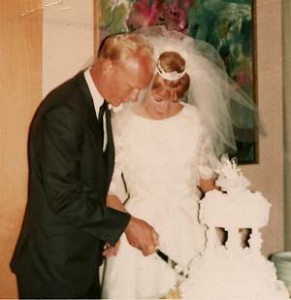 And yes, I still use his last name. I was twenty. It was the summer after my junior year in college in California. I’d been sent to Chico State on an ‘exchange’ program by my school in New Jersey who got five students from there every year. I never thought I would go away to college like my other high school friends did, because my family couldn’t ‘afford’ to send me.

I met Pete in the dining hall where I worked pouring orange juice into little glasses every morning at 6am. He was a track star, a graduate student and a music major. He played clarinet and saxophone. He was very smart and said the most profound (deep) things in my English novel class. Also, he was rather unusual looking. At 23 his bright blonde hair was already balding and he combed it back.

In retrospect (me looking backwards from now), I fell in love with his looks and his brain, and we got married because that’s what you did then. I didn’t really want to move back to New Jersey, and he didn’t want to go to his first teaching job in a small town in the Sierras alone. We had a beautiful wedding on August 25th 1964, in the church at First and Normal Streets on the Chico State campus. My mother and two sisters drove across the country in a Volkswagon van for the wedding. My father had died earlier that year of a heart attack at age 44. No accident that I managed to find and fall in love with and marry someone a little like him, within five months.

Truth is while we were ‘in love,’ we really didn’t know each other very well. He was not very social, and I was a very outgoing person. We were very young to figure out how to live with another person. We stayed married from 1965-1970, til I was 25. Did you see the movie Mr. Holland’s Opus about a band teacher in a small town? I was like Richard Dreyfuss’ wife, but during those years while he was the band teacher, I finished college and my teaching credential, taught high school in Sacramento and even finished a Masters Degree.

What went wrong? Why did I leave? We had great sex, but that’s about all. Lots of other parts of a full relationship were missing. We just weren’t socially mated. He was a long distance runner and into quiet and solitude. We never fought, but that’s because we hardly ever talked about anything until it was too late. He had this weird sense of humor and sometimes made fun of me, even in public.

Pete Hanson’s gifts to me were: a deep appreciation for both classical and jazz music, reading (we loved many of the same books), and of course sex as he was my first and very best (til Larry) lover. 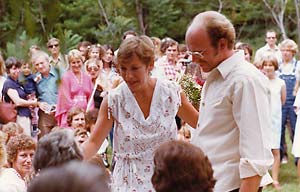 I was 34, and we’d lived together for four years by then, restoring a 150 year old farmhouse in upstate New York I’d bought before I met him.

I first saw him from the window of a girlfriend’s house in that village, as he was lifting a beam on the house next door. Funny, he looked like he looked like a huskier Pete Hanson: blonde and balding at 25 (I was 30). When my girlfriend told me was an architect and had just moved in to help restore that house; I ran over and introduced myself. We were living together in my house within a week. We had similar tastes in music, and food, and friends and politics. I was working on my Ph.D. while he was studying for his architects license.

Why’d we get married after four years? We were ready to have children. I knew he’d be a great father to the two blonde haired brown-eyed boys I always knew I would have. We also wanted to have a party and let all our friends celebrate the work we’d done on the house.

We weren’t really religious and didn’t go to church weekly, but the Episcopal priest who happened to live across the street and had a huge lawn and beautiful garden, married us. We wrote the ceremony ourselves and everyone loved and still remembers it. It was one of those storybook weddings: we marched out to the beginning of Elton John’s Funeral for a Friend from the Yellow Brick Road album.

We gave a rose to our mothers and grandmothers and thanked them for playing a part in our being there. Our vows were not the traditional ’til death do us part,’ stuff. Rather we promised aloud together to put more ‘acceptance, honesty, peacefulness, respect & playfulness’ into our lives. Unfortunately, these were bigger challenges than we realized at the time. We were together from 1976 to 1986.

Why’d we break up when our two children were two and four? It was time. We had more in common, and we were better socially mated than marriage #1, but there was lots we both didn’t like about each other. In fact sometimes I thought he hated me. We’d spent four years in counseling on and off working on our ‘issues.’ When we decided to get divorced, we said it was to give our kids a better model for a love relationship than ours. Brad your biological father was 4, and your uncle Brian was 2.

Sam Atherton’s gift to me, besides the beautiful boys he was a great father to, was architecture. We went to Finland and Denmark on our honeymoon. He gave me a whole new level of appreciation for buildings in every country: a wider way of looking at the world.

But, I saved the best for last: husband #3, was your Grandpa Larry. 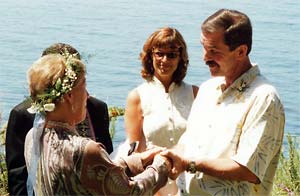 We called our wedding on May 6th, 2001 ‘The Seven Year Hitch.’ We held it a guesthouse on the coast of Big Sur where we’d gone the day we met fifteen years ago at a spiritual conference in Asilomar CA. I was 49 and he was 45. I’d been single ten years, and he was divorced almost two. He had a son close in age to your father, and a step daughter.

Ours was the involuntary “you-know-it-from-the-first-moment” kind-of love. At different periods in our lives we had been doing similar things: like living parallel lives. We’d both done a lot of psychological work on ourselves, had changed careers a few times, and were exploring our relationship with god, our spirituality. We were both attracted to one another intellectually as well as physically. He was really handsome: but had dark hair and moustache and looked like a young Ernest Hemingway or Jeremy Irons, not like ex’s # 1 and #2. Our like-mindedness makes this relationship so intense and passionate, still now after 15 years. Each time I return home after being away, even this year, I get that excited feeling in my chest and we run to meet one another and hug and kiss. Once early on, someone remarked that we were joined at the hip and Larry responded, “Yes, that and the cerebral cortex!” That is part of the brain.

The gifts this man still to this day gives me (and I him) are an acceptance of one another that is close to the unconditional love that god gives, a patience with each others differences in timing or shortcomings, a maturity that transcends the trivial, and an ability to sit down and communicate like adults when problems arise, and god knows we’ve been through some together! I call Larry my ‘Significant Equal.’ We both feel we get back from each other, equal amounts, if not sometimes more, than we give. And that exchange of energy keeps on growing!

I only wish for you both, that you learn whatever it is you need to live alone, and then find a partner half as good, no even better, than what Larry has been for me, but you find this when you are way younger than 49.

It’s almost Valentine’s Day, so let’s hear it for love!!!

Big LOVE to you: Grandma Pat

One response to “You were married three times Grandma?”