The artist/author of a great book I’ve just been gifted, Erin, Lee Gafill, 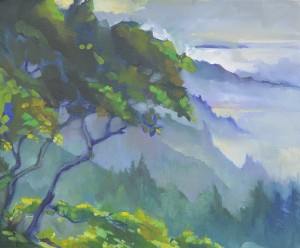 tells of a day she’d taken her six year old nephew for a walk on the beach and as they came back:

‘’We saw a lone seal slide out of a wave onto the beach and wiggle back into the surf again. Overhead five hawks twirled. We stood for a while and watched the seal moving in and out of the water, and watched the light hit the black rocks wet with spray and the dark clouds moving in.

‘Race you,’ William said as we turned to go, for real this time. He gave me a ten second lead but beat me back to where I’d left my shoes anyway. I’m sure he thought I was letting him win. Then he put his hand in mine and gave it a little squeeze.

This has been a year of the big squeeze for so many of us  – so many things have fallen apart and are (still) falling apart. But it is the little squeeze that will redeem everything, I think. A little hand reaching up to a big hand. A little trust, a lot of love, pancakes for breakfast, and Sunday night dinner with my family.”(p. 167 DRINKING FROM A COLD SPRING: A LITTLE BOOK OF HOPE © 2009 www.26LetterPress.com)

Well whether we have a little hand reaching up to squeeze ours in these ‘tremblin’ times,’ three years from when that was written, whether they be about the economy, personal loss, the peace that’s not on the planet yet, or what-ever; may we all imagine a squeeze that passes on “what in our bones we know to be true’ … to younger generations. They need to listen to our years of experience, which may not, but most likely has, led to more wisdom.  Onward, let’s begin to pass on the baton with more than a little bit of hope.