Promotion does not equal Profit … An Independent Author’s Taile

Promotion & Platform MAY NOT EQUAL PROFIT:

After the cases of my first book arrived, I held one misty-eyed in my hands. I’d done it. My four-decade dream of seeing my words in print had come true. When I first read Erica Jong’s Fear of Flying in 1973, and realized I’d had a zipless fuck on a train in Vienna before she coined the term, there were visions of dollar signs dancing in my head. I was already teaching Human Sexuality at the college level, and living my life like it was a bestseller. Those were my ‘Sex in the City’ years. Sex sells. I’d be rich and famous my twenty-something head said.

But alas, 40 years, sundry lovers between two failed marriages, two children and many day jobs later, my first published book wasn’t about sex, drugs or rock n’roll. This book, INVISIBLE GRANDPARENTING: the tale of how I dealt with separation from not one, but two grandchildren actually wrote me. I thought that with a niche market among 78 million baby boomers my healing journey would still sell.

After my first local book signing gala and sold about 30 books, my husband asked me for a favor. “Sure, what?” I said.

“You just delivered a baby, please! Don’t get pregnant any time soon.”

A few weeks later my therapist said the same thing. “Be forewarned,” she said one year out from her critically acclaimed book. “Promotion takes as much time, if not more effort, than getting that final product finished. Don’t start anything new.”

How right they were … and how the visions I’d had of retiring on a writing income were an illusion. Those authors who warned me not to give up my day job were right! Getting your book sold is expensive and exhausting. Out of your own pocket costs can border on the ridiculous.

I was invited to a Writers Festival in my hometown near Albany in upstate New York. For months before I set up a workshop on “Handling Separation and Leaving a Legacy of Love: Invisible Grandparenting” in a beautiful venue from 1-4 on and delivers 500,000 copies all over the Capitol region. I left books on consignment in two independent bookstores. I made it into on-line and print newspaper calendars. I sent an e-burst to 300 upstate and New Englanders on my I-contact database. Know how many showed up that sunny August afternoon? One! She being the contact I’d made through a new thought church there. She insisted I run the workshop for her and 11 invisible participants. I gave her my book of course.

At the Writers Festival a benefit for the local library (meaning authors donated their time and travel) of 35 people attending, 14 bought my book … close to 50%, not bad. But certainly not enough for the IRS to be happy about my writing off a round trip to New York.

So I decided to go for the big time … the REAL audience for my book about estranged grandparenting. I applied, with two others to present a twist on my title: LEAVE A LEGACY OF LOVE, NOW! on the Ideas@50+ Stage of the AARP convention, that promised a mere 10,000 folks might peruse the booth/exhibit we would set up and wander over to our 45 minute talk which made it to the short pull-out program.

However, once we got accepted for that stage we learned we had to PAY for that honor or find a big corporate sponsor. After six weeks of being turned down by corporations like VITA Hospice Care, and AARP’S United Health Care and having the LLC business data submitted by we three independent authors, not “vetted” until three years of W2’s from our publisher were finally approved, it was two weeks from show time. Something should have told me then that trade shows were costly ways to promote products like ours, but those visions of dollar signs were still dancing in my head.

Splitting the expenses was the only way to go. Our $800 to grace the stage would get us one hand-held microphone and one lavaliere one. Would we like two more so our terrific trio could perform in front of slides? $102 each.

Also, for a mere $1200 “they” “give” you a 9×10 red-curtained square of cement space for the exhibit hall booth, and a banner that reads # 2830, LEAVE A LEGACY OF LOVE, NOW! with the name of our finally found sponsor: Park Place Publications. 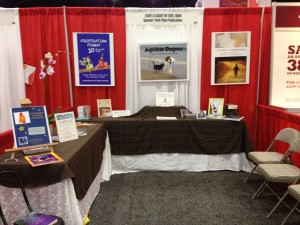 The total of all the AARP rentals came to $587 before we found out we needed another small table for the “food” we heard would draw people in: candy for the ladies, nuts for men. On site that table cost us $140. And if we hadn’t carried our own boxes of books, tablecloths and materials from the underground parking lot at the opposite end of three-block long San Diego convention center, we could have hired union help @ $80 per 100 pounds!

Again, although one of us was legally blind, we three independent entrepreneurs did it ourselves. We each opened PayPal accounts and got those little gizmos that let you collect from credit cards on I-phones and pads. We needed CA Board of Equalization Sellers Licenses, but that was a breeze at $5. We’d better sell lots of books to even break even. Though we split our total costs three ways, travel and even a free hotel room for four nights courtesy Marriott, came over $3,900.

Opening day was exciting. Just before the crowds came in there was a countdown: 10, 9, 8 … and thousands of silver-blue-haired elders (hardly baby boomers) rushed in carrying their red ecologically correct shopping bags. We soon learned they were after the goodies: star shaped sunglasses that blinked, t-shirts and exercise balls if you danced with Silver Sneakers, free luggage tags, health record notebooks … my favorite being a protein bar after you walked through a 10-foot high balloon tunnel of a colon, that ended directly next to the bathroom. 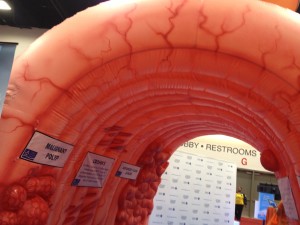 That first day, one woman told me she hiked ten minutes from the AARP bookstore that held “Display Only” copies of my book, to get mine. As she told me her story of estranged grandparenting, I sighed, and realized it was all about connections like these. Each time I talk publically, someone comes up to me and says “I thought I was the only one,” hand to heart.

I should have read the writing on the wall earlier this summer. In spite of in-person pitches by the minister of one of the biggest New Thought churches in San Diego, only six people showed up for my workshop on “Healing Separation.” They loved it of course. Another ‘Virtual Center for Spiritual Living’ sent 300, and I sent 700 notices of a free on-line workshop of “Leave a Legacy of Love Whether You can be there or Not: Virtual Grandparenting.” Know how many turned on their computers that Saturday morning nation-wide? Nada. Zero. 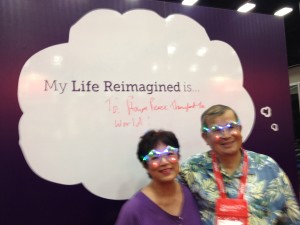 We gave out 200+ copies of flyers personally getting promises from folks they’d come to our talk at 4:30 Friday afternoon; but by then, guess how many seniors showed up? Sigh. Only two dozen! And the microphones we ordered had to compete with exercise groups on the next stage working out! There went the audio on the great video we were going to edit and put up on YouTube.

Dreams of dollar signs dropped quickly; we realized by the fourth day, after AARP’s highlight: being able to hear Kevin Spacey & Julia Louise Dreyfuss & Arianna Huffington from the first row, courtesy the cane of our disabled author; we realized it was ALL about the connections. Not the profit. How many books did I sell of the 300 I dragged down there? Seven. But I gave away four … and wished I’d handed out more free.

What did I learn? Trade shows like AARP are certainly not the place for independent authors to promote books. I was profoundly exhausted, but I’d had fun. This had been work, certainly not lucrative, but my intention that I’d set years ago in a spiritual workshop of “my voice, heard on the highest level, to do the greatest good, (for the maximum reward and the most fun I’d added later),” would be happening. No, it was already happening. Several media people who publish magazines for elders or line-up speakers for senior communities had given me their cards.

Perhaps selling books is not about the profit! Especially books about handling a difficult aspect of life. Getting people to read your words, and being affected by them, isn’t something you can measure.

So I “let go” of illusions of profit; but even now weeks later I cannot give up on my vision of getting my words out there. I will continue to promote Invisible Grandparenting in different ways closer to home. And sans the dollar signs glazing my eyes, maybe I’ll resurrect some of that sex stuff. Surely In Search of a Significant Equal tracing the labyrinth of choices I made before finding love late in life, twenty wonderful years ago, would sell, even to baby boomers.