MY MOTHERS DAY MESSAGE IS “YES …. and”

MY MOTHERS DAY MESSAGE IS: “YES AND”

A week ago I did standup comedy at our small community’s annual talent show on “Glorious Women Never Age?” And yesterday I took an improv comedy workshop with this amazing woman who just moved to my community. (forgive the photo I’ll fix it tomorrow). 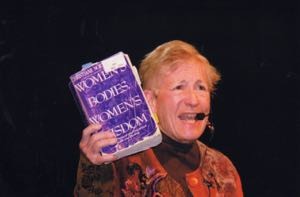 learned what I’d’ve never guessed: the secret to Improv is supporting your partners both on stage and off by using the phrase “YES, and …” in all communications. It changes the metric of how ANYthing can happen and evolve. Jacqueline Kabat  (See bio below) read us the following about this, at the end of a hilarious and amazing day. We with estranged children, or invisible and alienated grandchildren need to know how to move on in the face of hurt and pain, and even the joys of reconciliation should that occur. This, in Jacqui’s words, Is my Mother’s Day message to all of us: female, male, parent or not.

Comedy Improv Can Save The World – By Jacqueline Kabatwww.jacquelinekabat.com

My intuition that tells me (often passionately) that comedy improv is one tool that can save the world. The most important words when doing comedy improv are “YES AND…” Applying these two words allows for compassionate conversation. The performers and the audience will feel the conversation lift.

There are many ways to manage our angst and improv gives us space to do that. “YES AND” gently assists us from detaching from our uncomfortable struggles. For example, “YES that was tragic. AND maybe a greater dance of life is unfolding from this struggle.” We can even apply this on ourselves. “YES that happened. AND now I have the space to….”

There’s no resistance with “YES, AND…” The other person has nothing to push against. Everything seamlessly calms down and a conversation can flow. I see so many people willing, ready and hungry to grow and change. I feel it comes down to utter faith when we’re ready to take that leap into the unknown. The ride will happen. YES, we have no idea how it will play out. AND Improv is one tool that will make it go smoother.

I feel we are being called to heal ourselves. Heal our community. Heal our world.  Improv is an astonishing helpful way to allow that to happen. I’ve worked with a wide variety of communities including engineers, corporations, adults and teens with Asperger’s, at risk youth, and VERY Republican women. Communities evolved. Fast. Improv is a safe context to get a vibrant connected community together. With laughter. Anyone who says that laughter is not healing is exercising superiority and control. I bless them and walk away.

I use the word “safe” quite a bit. Let’s face it, you can’t change the world by freaking people out. Improv allows us to let go of certainty. And in a way that allows others to support us along this challenging journey. And we’re helping them. We come out of it. We land where we need to be knowing that we’re fundamentally changed. Then life starts working for us rather than against us.

ABOUT JACQUELINE KABAT
Jacqueline Kabat recently moved to a 3-acre ranch in Aromas on the stunning Central Coast of California after 17 years in New York City and Brooklyn. She has been involved in all aspects of stand-up comedy, comedy improvisation, and sketch writing since 1997. She has studied, written for and performed with Second City’s Ann Bowen and studied with Saturday Night Live’s Amy Poehler while with the Upright Citizens Brigades. She worked with Sex in the City’s Mario Cantone while warming up studio audiences at ABC Studios. Jacqueline has emcee’d and done stand-up comedy at popular New York clubs. Do check out her on Faceook & her website.

Currently she is offering comedy improv workshops at her ranch and sharing this little piece of heaven with other artists, teachers, and corporations who want to offer workshops and have a place to collaborate with the philosophers, the visionaries, the artists, and anyone who wants to improve the human condition. Jacqueline’s passion is building and being part of creative, compassionate, and conscious communities. Her philosophy is: Creativity + Nature + A Supportive Authentic Community = Magic.