After a shocking election in which the electoral system placed not the first woman in the White House, but a dangerously unstable man with a history of degrading not only women but races, religions and the environment; I am reminded of the blog I wrote as a letter to my grandchildren in Nov 2012. In it I pictured the map of red and blue states as it was then, and I’ll place the 2016 one in now. Today working for the common good, as exemplified when purple emerges as red and blue are mixed together is even more vital. Find some little way, like the woman who placed copies of the Maya Angelou book Mom and Me and You on the New York subway hoping people will pick it up instead of the one-sided media that helped create this “win.  Actress, U.N. Women Goodwill Ambassador and real-life Hermione Granger, Emma Watson tweeted Wednesday afternoon that her first post-election step would be to take Maya Angelou books to the New York City subway.

“Then,” she added, “I am going to fight even harder for all the things I believe in.”  What little way can you place light somewhere instead of the disappointment fear for the future you may feel right now?

… Barack Obama quoted  John F. Kennedy’s “Ask not what your country can do for you, but what you can do for your country.”  “America’s never been about what can be done for us. It’s about what can be done by us together…” He ended with reminding us we “we remain more than a collection of red states and blue states. We are and forever will be the United States of America.” 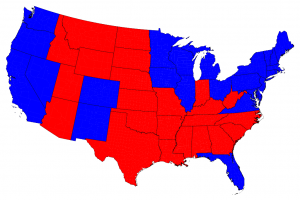 See http://www.nytimes.com/elections/results/pr  2016 for the difference!