A Trans Siberian Orchestra gift to Myself!

I probably just destroyed a few more cells in my already damaged ear drums from a rock opera/light show like none I’ve ever seen. As a day after Thanksgiving treat for myself, when I heard they’d be in town only one day, I was able to get one ticket to the Trans Siberian Orchestra in San Diego Sports Arena. 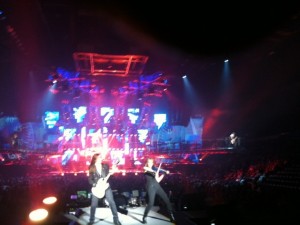 OMG … twitter for Oh-My-God! My son gave me their Christmas Eve and Other Stories CD a few Christmases ago when he was away. I think it was Iraq even. I remember tears streaming down my face as I played it during a long drive home from somewhere, listening to the bellowing deep voice of the narrator talk about angels and orphans and a prince of peace coming down as a star from the night, all to a full orchestra and some of the most fantastic guitar I’ve ever heard. When I thanked him, he said he was just surfing the net and thought I’d like it. Was he ever right.

Well, the Christmas story was just the first third (!) of a rock opera extravaganza and light show that wrapped around to reach out and touch the entire crowd in the arena … plus mind boggling multi-screen videos, and even flaming fire torches from a stage that rose up right in front of the seat I’d managed to get, with the ‘hot’ violinist and guitarist not twenty feet away from me!

All I can say is thank-you god for their talent, the technology that made this possible, and my living long enough to have had this experience! GO my friends, GO!